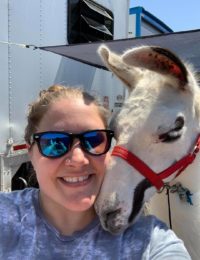 Heather Grantland, originally from Monett, MO, has been in the animal health industry since 2002. Heather met Dr. Grantland at a clinic that they both previously worked at in Missouri. They got married in 2013 and moved to Alabama August 2014. Heather and Dr. Grantland purchased Athens Animal Hospital and had their handsome son, Henry, within the first 2 months of living in Alabama and now have a beautiful daughter, Elenor. They have 5 dogs, 2 indoor cats, 1 barn cat, goats, and chickens. Heather enjoys cooking, crafting, spending time outdoors by the water with friends & family and is a big children’s literacy advocate.